The Choice Engineering Team has been working diligently to improve the lighting condition along eleven corridors in Miami Dade County. This effort is in support of the Florida Department of Transportation (FDOT) response to nearly 500 pedestrian fatalities per year calculated between 2009 and 2013. In 2013, the Department calculated a total of 8,410 pedestrian crashes, of which 22 percent were fatalities and 78 percent of the fatalities occurred between dusk and dawn conditions. Of the total nighttime pedestrian crashes, over 57 percent of the fatalities occurred in a lighted environment. This finding led to a proposed work program amendment for lighting retrofits at signalized intersections and intersection retrofit funding was allocated to each FDOT District.

With the leadership of our Team, Rafael S. Aguiar, P.E., setting the bar and expectation for excellence from this Team, we ensure these projects have been prioritized and designed with the safety of our community’s pedestrian and motorist in mind. Thorough reviews of the existing corridors were performed; the existing load centers, existing light poles to be retrofitted, location of the proposed poles, and sidewalk flags that require restoration/replacement were evaluated in the field. We utilized a Bosch laser measure instrument to measure all existing light pole mounting heights, and arm lengths to ensure accuracy in our design. The latest version of one of the lighting industry’s most trusted lighting software, AGi32, was used for our design.

This has been a vigorous effort in terms of scheduled as five of the eleven corridors are being let to construction between September and October of this year and the remaining in 2021. Although challenging, this experience has been a very humbling experience. The Choice Engineering Team experience and expertise in designing roadway lighting supports the FDOT mission to provide a safe transportation system for our community. 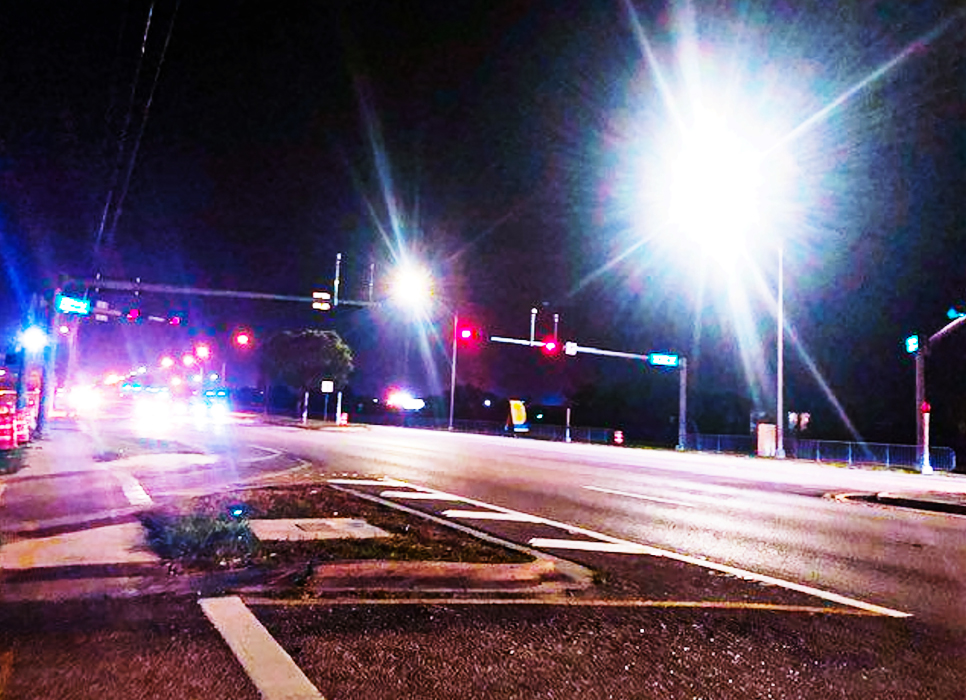 Night-Time View of a Studied Intersection