Osvaldo A. Rodriguez, E.I. is a full-time traffic engineer for Choice Eng. and a part-time graduate student at Florida International University (FIU); currently pursuing his master’s degree in transportation. This Fall 2020 semester, Osvaldo was tasked by FIU to perform a sensitivity analysis on three of the sixteen default driver calibration parameters available on Synchro 11’s SimTraffic software application.

It is important to note that Synchro and SimTraffic are two separate software applications. Synchro performs macroscopic analysis and optimization supporting the Highway Capacity Manual’s 6th Edition, 2010 and 2000 version. Whereas, SimTraffic is the traffic simulation software that performs micro-simulation and animation. Both applications have unique inputs to calibrate and will output a different performance report.

Many arterials roadways in Miami-Dade County can regularly exhibit speeding/aggressive driving behavior, especially during the afternoon (PM) period. Because of this, special consideration is often required when calibrating the driver characteristics of a traffic model to accurately simulate field collected measurements. The purpose of this assessment was to identify and document the sensitivity of the driver calibration parameters: gap acceptance factor, green reaction time and headway at 20-mph on different Measures of Effectiveness (MOEs). These are driver parameters that are typically considered when calibrating a model for a generally more “aggressive” driving population. Both stop and total delay per vehicle in seconds, along with travel time in hours and average speed in miles per hour were chosen as the performance metrics of interest to this study. 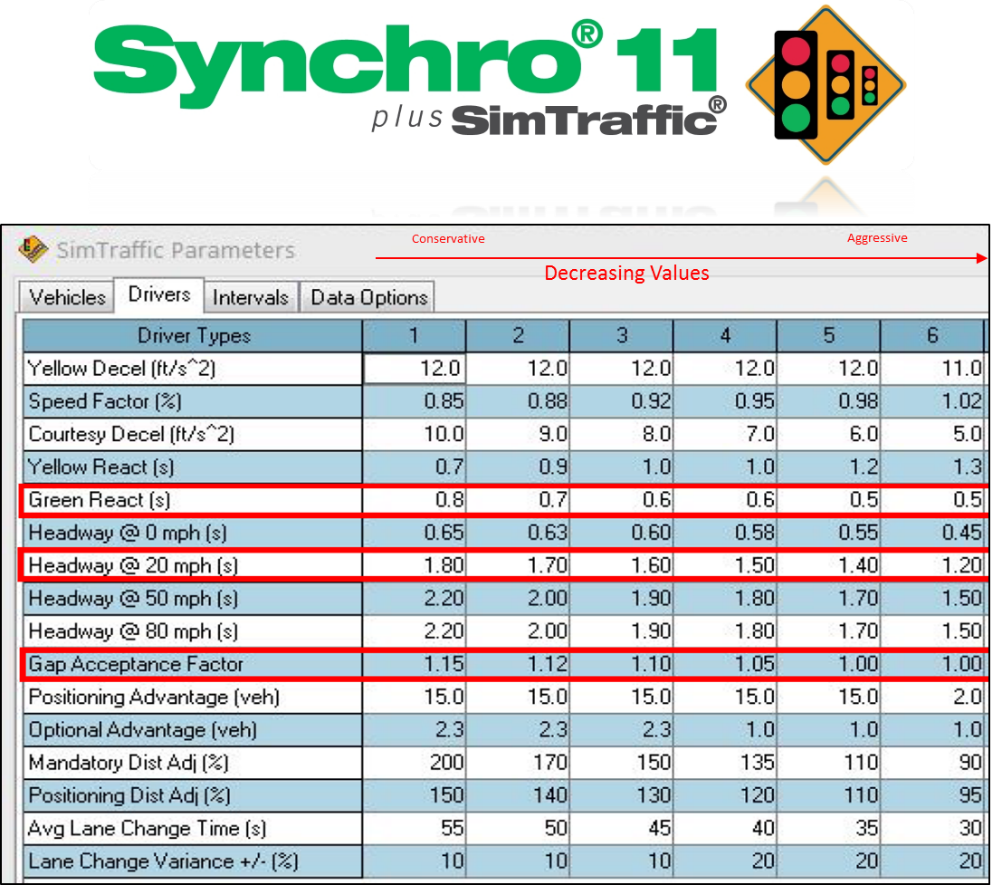 Aerial image of the project area

To develop the base model, volume synopsis reports developed by CTS Engineering were used to determine the 5:00 PM to 6:00 PM peak hour for the afternoon period and the associated hourly turning movement counts. The afternoon peak period was specifically of interest because of the increased trend in aggressiveness by drivers rushing to get home after a work day. Other volume-specific information such as the peak hour factors, heavy vehicle percentages, and number of pedestrian conflicts were also taken from these synopsis reports and used to develop the base model. For the signal timing and phasing information, historical Time-of-Day (TOD) schedule reports were referenced from Miami-Dade County’s ATMS software, KITS. Other signal related documents such as the SOPs and as-builts were reviewed and used to aid where possible.

Base model on Synchro 11 for the project study area

With the base model completed, the SimTraffic software was then utilized on the base model to output all the available MOEs for 10 different seeded runs. The average value of all 10 runs, for each MOE, was also computed and used to perform evaluations. Additionally, non-controlled hypothesis tests were performed with a confidence interval of 95% to show statistical significance when considering natural randomness. With a sample size of 10, two-sided T-tests were used to evaluate the null hypothesis for each adjustment category. The null hypothesis being that there is no change between the post-condition and the pre-condition. Also calculated for each test was the acceptable error, which consistently gave an error value of less than 5%. 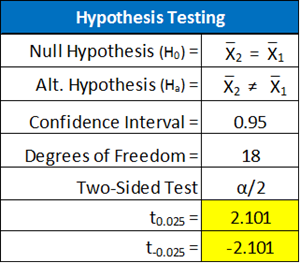 The gap acceptance factor and green reaction time driver parameters, both produced minimal effects when calibrating. Additionally, no relationships could be established between the driver parameter and the MOEs analyzed in this study. The results for calibrating these parameters often vary yielding unpredictable trends which may not always be helpful. Perhaps calibrating both parameters in tandem may produce more significant results than testing either one alone.

The headway at 20-mph driver parameter on the other hand, produced significant effects when calibrating. Additionally, a linear relationship was identified between the driver parameter and the MOEs analyzed in this study. The results for calibrating this parameter yielded predictable trends which can be especially useful in calibration efforts where drivers are traveling more aggressively than the model is predicting; meaning that field collected measurements such as travel time or delay are lower than the simulation outputs. In these cases, you can reduce the headway factors which will increase the flow rate; meaning faster travel speeds and lower travel times. Calibrating all headway factors simultaneous may produce an even greater magnitude of change so some discretion/engineering judgement is required to accurately fine-tune a model. 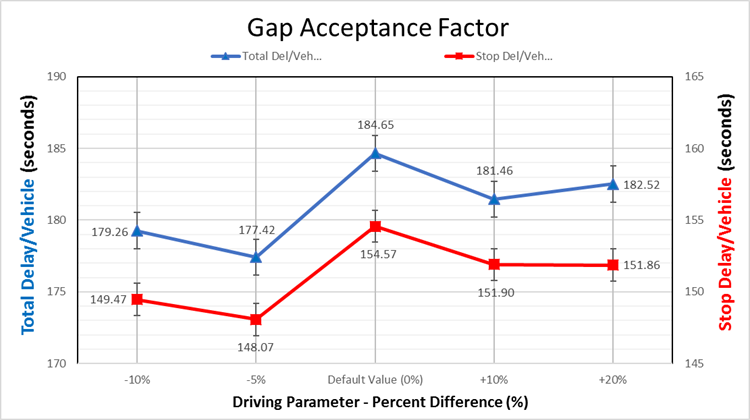 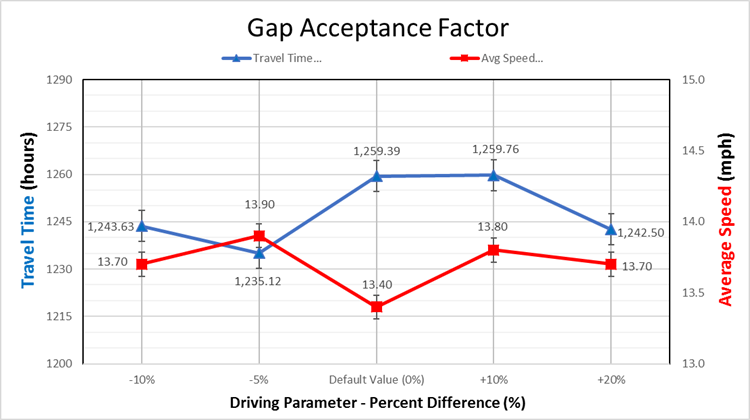 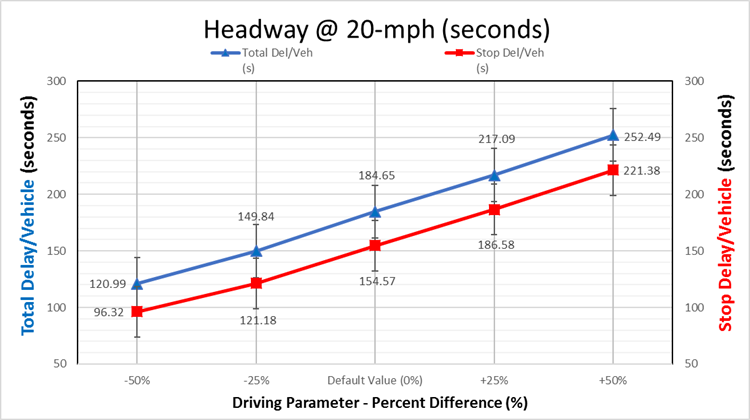 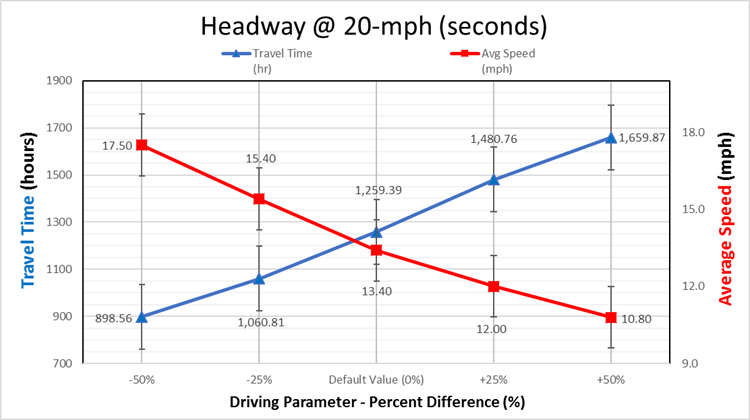